The Best Restaurants in America 2016

“Best” is the most subjective word in the English language, and narrowing down this group is as grueling as it is exhilarating. Of course these places all serve wonderful food: avant-garde noodle bowls in Manhattan, soul-soothing roast chicken in San Francisco, Lebanese mezze in Michigan, the Russian layered salad known as “herring under a fur coat” in Portland, Oregon. Their culinary excellence is a given. But each of these restaurants also leads the dining conversation in their communities — and by extension, the nation. Together, they form a mosaic illustrating how we eat in this country, and how we build culture around food.

Like the city-based Eater 38 maps on which it is modeled, this roster of restaurants evolves slowly. The worst part is removing places from the list to make way for new ones (or, in the case of Houston’s Oxheart, a stalwart of previous years’ lists, because of its upcoming closure to revamp). Both inclusion and exclusion ultimately always come down to the question of which restaurants feel most relevant right now — even if their relevance comes in the form of a certain timelessness. Newcomers this year include a Sichuan upstart in California’s San Gabriel Valley, a fine-dining star in Minneapolis, and a standard-bearer of Southern graciousness in Birmingham, Alabama. (To qualify for inclusion on this list, restaurants must be open for at least 18 months; the too-young serious players get their own list, our annual Best New Restaurants in America roundup).

This is the third year of this list; more than half of the restaurants recognized have been here before, and those standard bearers who’ve made it in every time — there are fourteen of them — are hereby designated Hall of Famers. Just as exciting: This year, for the first time, I’ve named a Best Restaurant in America. Dining at this luminary is such a dynamic experience that, honestly, the decision to name it as the finest among paragons wasn’t all that difficult.

Most of all, in a complicated time for our country, this body of restaurants represents a definition of the United States that I cherish: multicultural, ambitious, welcoming. These are places for us all to savor. I’ll meet you at the table.

The Best Restaurants in America

Restaurant of the Year 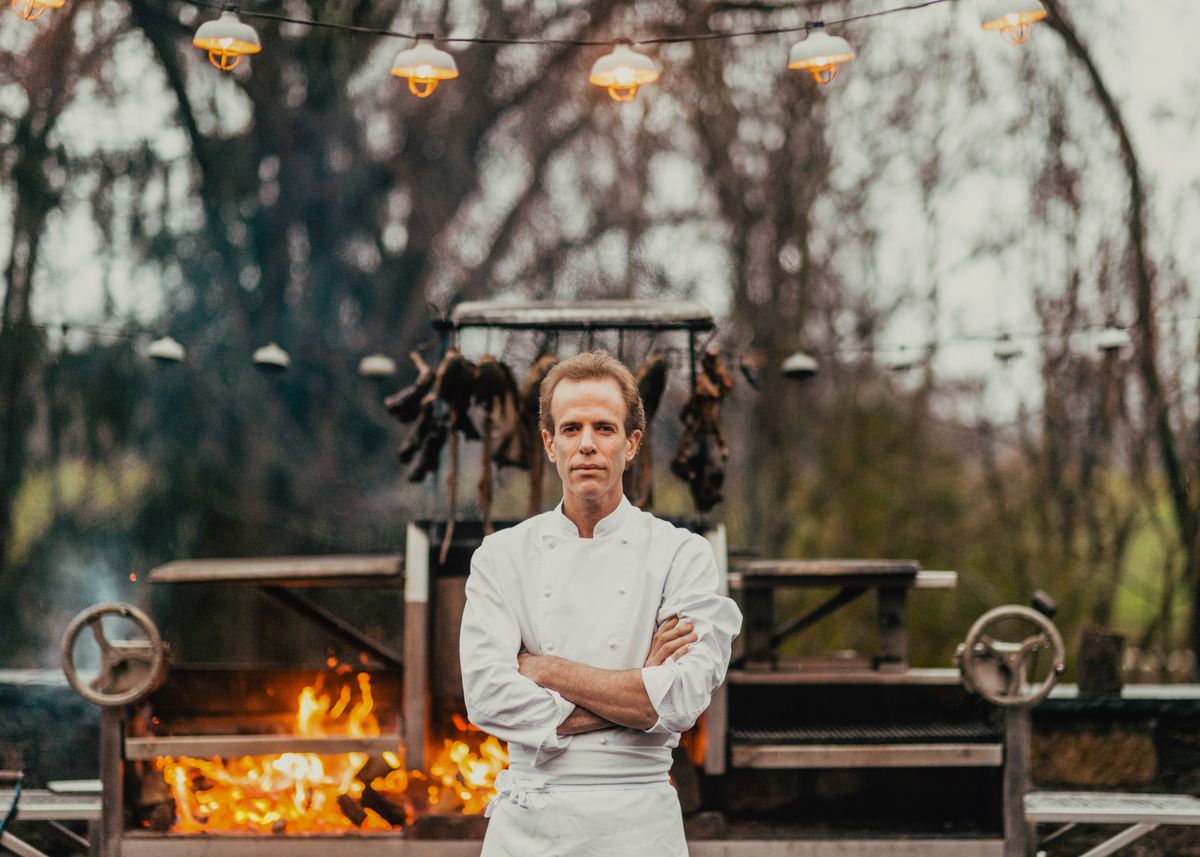 You can start to understand chef Dan Barber’s revolutionary ethos by reading his books, watching his TED Talks, or dropping by the Manhattan outpost of his Blue Hill mini-empire. But for the most thorough — and deeply pleasurable — immersion into his world, you have to make the trek 30 miles north of New York City to the Stone Barns Center. There, you’ll find Barber’s crown jewel: Blue Hill at Stone Barns, a restaurant tucked in the hills of a century-old working farm. Stone Barns isn’t just an exquisite fine-dining restaurant serving magnificent tasting menus; it’s an experiment, a laboratory, a learning center, and a model for the future of agriculture. The travel itself builds anticipation: on the train or in a car, the city falls away, mile after mile, until finally you turn down the farm’s long, winding driveway, where the surrounding lushness tunes your mind and senses for the feast ahead.

Beyond their freshness on our list of the best restaurants in America, there’s no easy throughline with this group—and that’s as it should be. Our freshman class includes restaurants from every corner of the country, with menus reflecting cuisines both homegrown and far-flung, mostly young trailblazers but also one institution that’s been around since 1962. One thing they do all have in common: After dining at each of them, I sighed with intense satisfaction and thought to myself, “This place is special. Everyone needs to know about it.” —BA 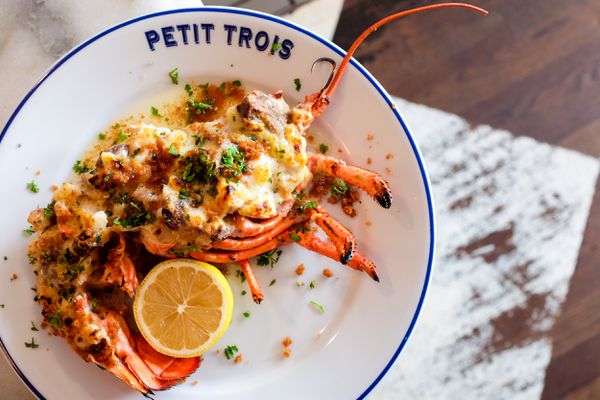 Petit Trois, Los Angeles | French cuisine is making gains again as a front-and-center cuisine across America, and I’d wager that Ludo Lefebvre’s transcendent take on bistro food has singlehandedly nudged things along. He runs this tiny, open-all-day, card-only, walk-in-only spot with Vinny Dotolo and Jon Shook (their sensational tasting menu counter Trois Mec, which was on this list last year, sits next door), and in his hands classics like rolled omelets, butter-drenched burgundy escargot, and croque monsieurs have more refinement and moxie than you remember. 718 Highland Ave., 323.468.8916, petittrois.com 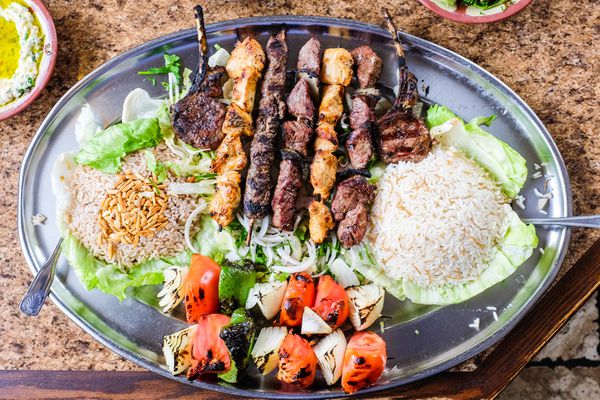 Al Almeer, Dearborn, MI | Detroit’s metropolitan area is home to one of the largest Arab American populations in the United States; Dearborn in particular houses an abundance of Lebanese restaurants serving mezze like hummus and tabbouleh as well as colossal kebabs. Al Ameer, opened by chefs Khalil Ammar and Zaki Hashem in 1989, shines as an example of hospitality and superb cooking. They also run a butcher shop, an advantage that shows in the freshness of their peerless stuffed lamb. 12710 West Warren Ave., Dearborn, 313.582.8185, alameerrestaurant.com 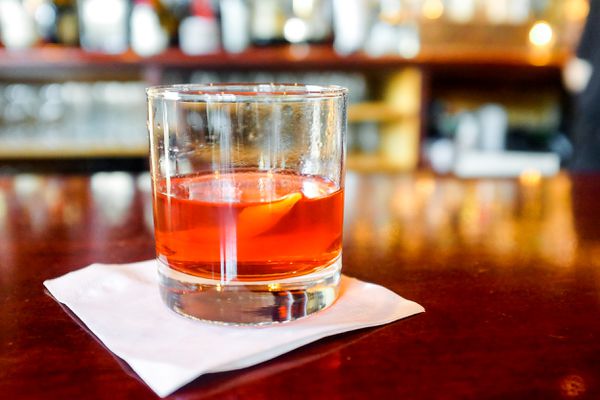 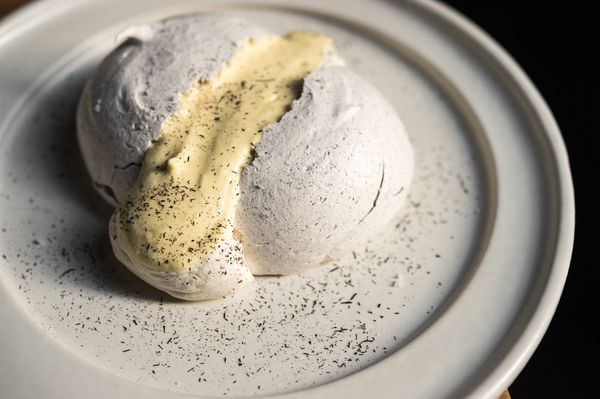 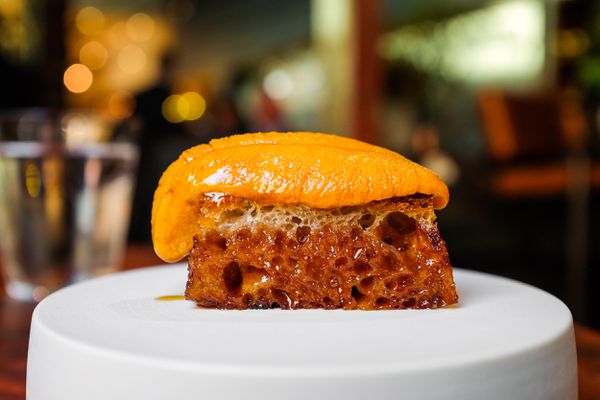 Saison, San Francisco | First, the sticker shock: Saison’s tasting menu costs $398 per person, not including an optional wine pairing of $298. But what you get is one of the country’s most remarkable dining experiences: Joshua Skenes’s brilliant cooking is at once surgically precise and disarmingly comforting. Before a meal veers into sea urchin, abalone, and hairy pig, for example, you might be served a mound of caviar paired with biscuits fresh from the oven. 178 Townsend St., San Francisco, 415.828.7990, saisonsf.com 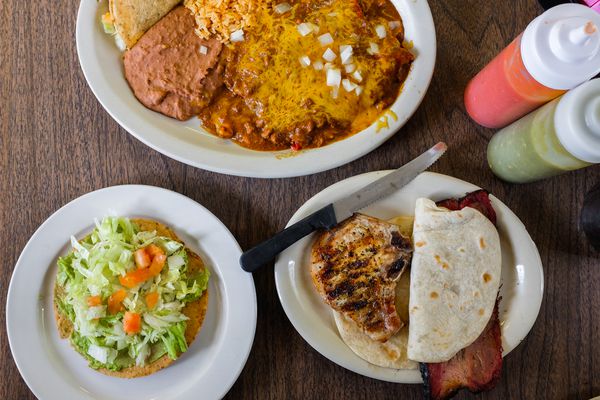 Garcia’s Mexican Restaurant, San Antonio | Singling out one Tex-Mex restaurant above all others in the Lone Star State? Any answer I could give would be fighting words. But let’s squabble at Garcia’s, while we scarf down a Deluxe Mexican Dinner plate (it includes two cheese enchiladas, a pork tamale, and the essential web of yellow cheese, for starters) and two of the restaurant’s unorthodox, awesome tacos: one with brisket, and one folded around a bone-in pork chop. 842 Fredericksburg Road, San Antonio, 210.735.5686, no website 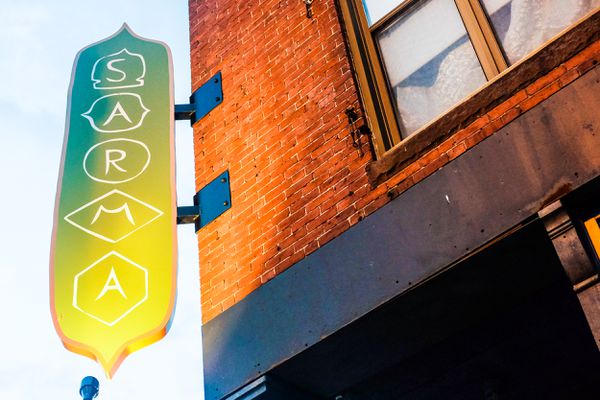 Sarma, Somerville, MA | Inspired by the mezze spreads served at meyhanes(Turkish taverns), Cassie Piuma maps out an exhilarating survey of the herbaceous, sun-baked flavors of the Middle East. Her recipes meld with the local seasons, assisted by produce from the farm of co-owner Ana Sortun. 249 Pearl St., Somerville, 617.764.4464, sarmarestaurant.com 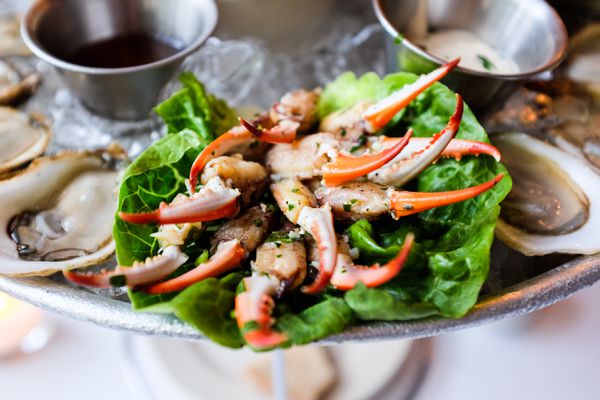 Highlands Bar and Grill, Birmingham | Decades before the country’s turned to its latest round of having paroxysms of delight over Southern food, Frank Stitt returned to his native Alabama from cooking stints in California and France and made Highlands, the flagship of his three Birmingham restaurants, a national destination, and his elegant presentation of regional cuisine is as vital as ever. The restaurant’s hospitality has long been equally distinguished as its food, due to Stitt’s secret weapon: his gracious wife (and front-of-house maven) Pardis Stitt. 2011 11th Ave. South, Birmingham, 205.939.1400,highlandsbarandgrill.com 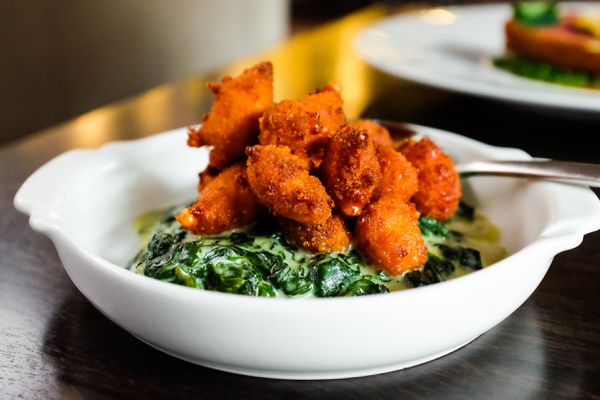 Spoon and Stable | Gavin Kaysen returned from New York to Minnesota, his home state, to open a restaurant that serves modern American cooking at its most fully realized. He draws on cuisines from around the globe for inspiration, but he always links his menu back to the upper Midwest with splendors like bison tartare and whimsies like fried cheese curds over creamed spinach. 211 North First St., 612.224.9850, spoonandstable.com 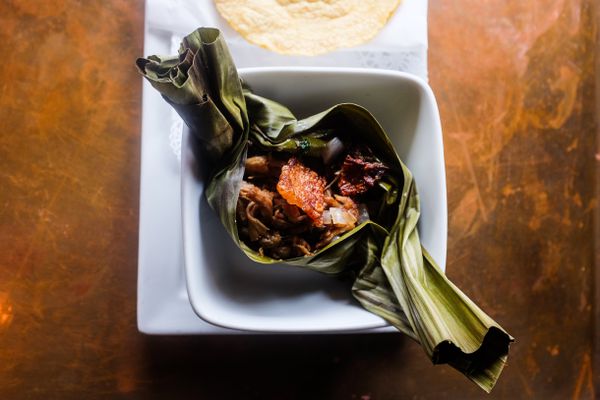 Hugo’s, Houston | The enduring crown jewel among the four restaurants that chef Hugo Ortega owns with his wife, Tracy Vaught, Hugo’s recounts Ortega’s culinary travels, research, and memories through his native Mexico — gastronomic stories told via dishes that are complex, but always balanced. His mastery of chiles and meats and maize (truly, don’t miss the lechón with habanero salsa and tortillas) stands out even in a city rife with excellent Mexican restaurants. 1600 Westheimer Road, 713.524.7744 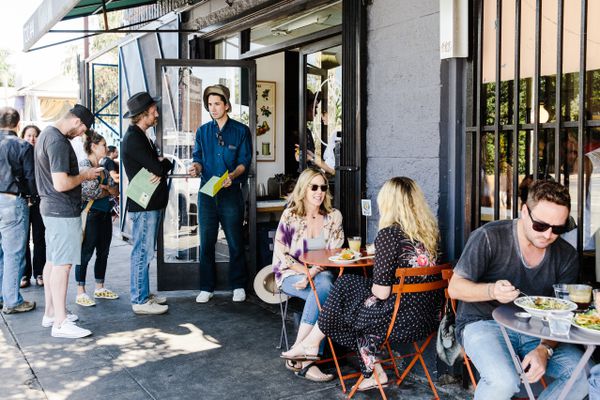 Sqirl, Los Angeles | If Jessica Koslow’s tiny storefront in LA’s Silver Lake neighborhood wasn’t already a phenomenon — shorthand for the California breakfast and the ascent of the grain bowl — then the publication of her cookbook sealed it. There are reasons for her victory: The combined flavors in her famous sorrel rice bowl suggest how sunshine on a lemon tree might taste, and the ricotta toast painted with three jams (upon request) resembles a flag to which I’d gladly pledge allegiance. 720 North Virgil Ave., Los Angeles, 323.284.8147, sqirlla.com

Szechuan Impression | In seeking out Sichuan restaurants coast to coast, none have impressed me more than Lynn Liu and Kelly Xiao’s bright corner perch in a San Gabriel Valley strip mall. Dishes like lamb on toothpicks and hot pots with a dozen different animal cuts bubbling in red oil show off exceptional clarity of flavor and an alchemical approach to spicing, a take on the cuisine that’s famously fiery but also incredibly nuanced. 1900 Valley Blvd., Alhambra, CA, 626.283.4622, szechuanimpressioninc.com

Milktooth, Indianapolis | Jonathan Brooks is at the vanguard of those skilled chef-disruptors changing how America thinks about daytime eating. His dishes — like savory puffed Dutch baby pancakes with roasted broccoli, aged cheddar, beer mustard, and pickled fennel — have the kind of punchy, finessed flavors you’d expect at dinnertime, but the restaurant only serves customers for breakfast and lunch. 534 Virginia Ave., Indianapolis, 317.986.5131,milktoothindy.com

Willows Inn, Lummi Island, WA | On a tiny island in the Pacific Northwest, two hours north of Seattle, Blaine Wetzel orchestrates four-hour dinners that double as manifestos on the area’s unparalleled bounty. Stay the night to fully relax into the spectacular setting; sitting down to the array of local fruits at breakfast is a waking dream. 2579 West Shore Drive, Lummi Island, 360.758.2620, willows-inn.com

Miller Union, Atlanta | Steven Satterfield draws on the breadth of the culinary South — its agrarian roots and its modern, immigrant-rich perspective — to craft dishes with the depth and sly intricacy of a Faulkner short story. Among his many talents, the man is a rice whisperer — if Savannah red rice or shrimp and andouille gumbo happen to be revolving through the menu (which is as terrific at lunch as it is at dinner), you know exactly what to order. 999 Brady Ave., Atlanta, 678.733.8550, millerunion.com

Zuni Cafe, San Francisco | Zuni Cafe is the nation’s neighborhood restaurant. Judy Rodgers, who died three years ago, built the place into a guidepost of physical and culinary comfort. Owner Gilbert Pilgram and head chef Rebecca Boice maintain her legacy triumphantly. Menus evolve daily with the season, but there’s no escaping the Zuni classics: the iconic roast chicken for two, the trend-igniting burger, the peerless Caesar salad, and the bowl of polenta that is surely more dairy than corn. 1658 Market St., San Francisco, 415.552.2522,zunicafe.com

Alinea, Chicago | This year’s renovation made America’s most audacious fine-dining restaurant more interactive and more luxurious — which is to say, better than ever. 1723 N. Halstead, Chicago, IL, 312.867.0110, alinearestaurant.com 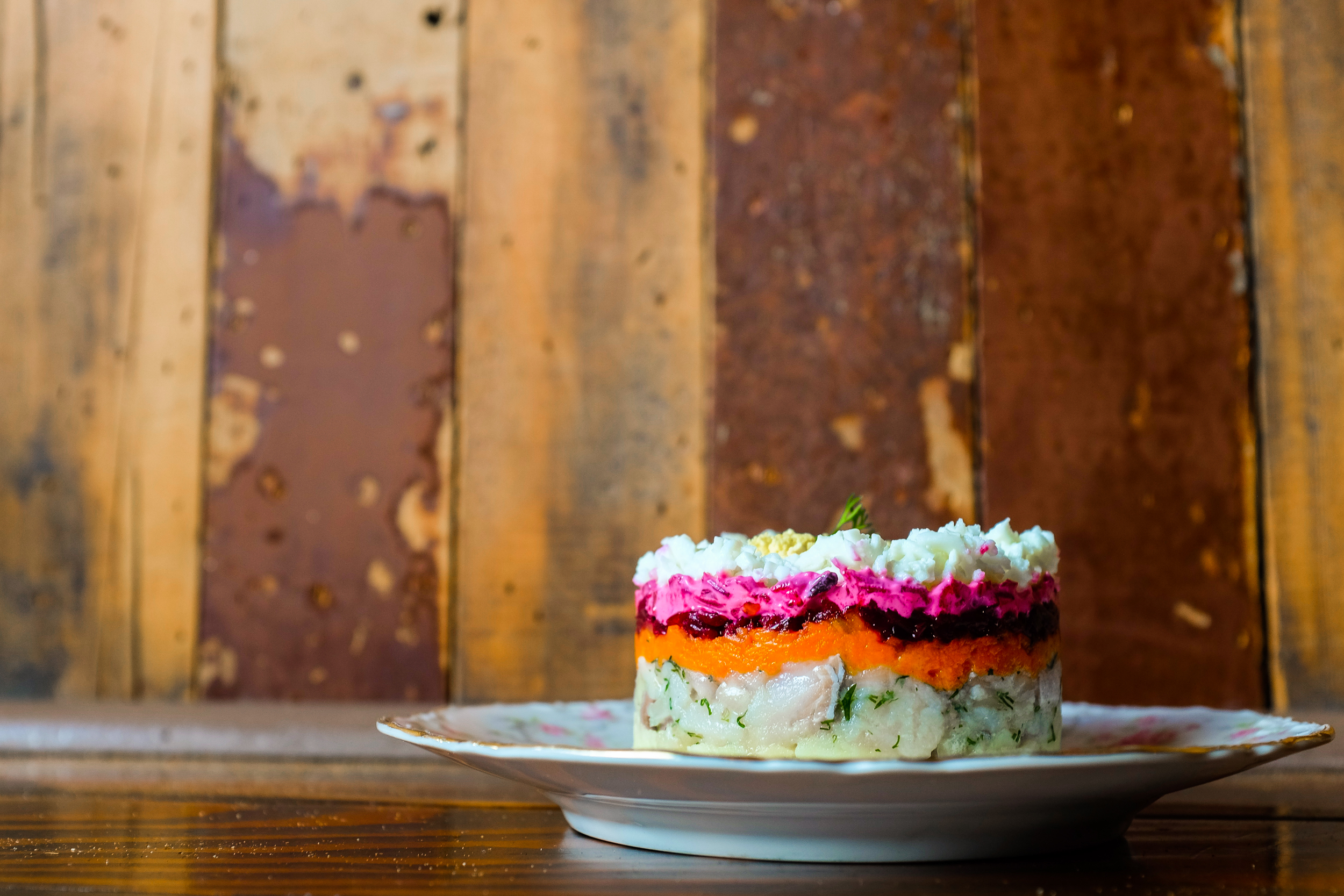 “Herring under a fur coat” at Kachka in Portland, OR

FIG, Charleston, SC | Only one meal in Charleston? Make it Mike Lata and Jason Stanhope’s paragon, which takes its cues from the Lowcountry’s abundant waters. 232 Meeting St, Charleston, SC, 843.805.5900, eatatfig.com

Kachka, Portland, OR | Bonnie and Israel Morales offer the most spirited introduction to Russian dining (and drinking!) in America. 720 SE Grand Ave, Portland, OR, 503.235.0059, kachkapdx.com 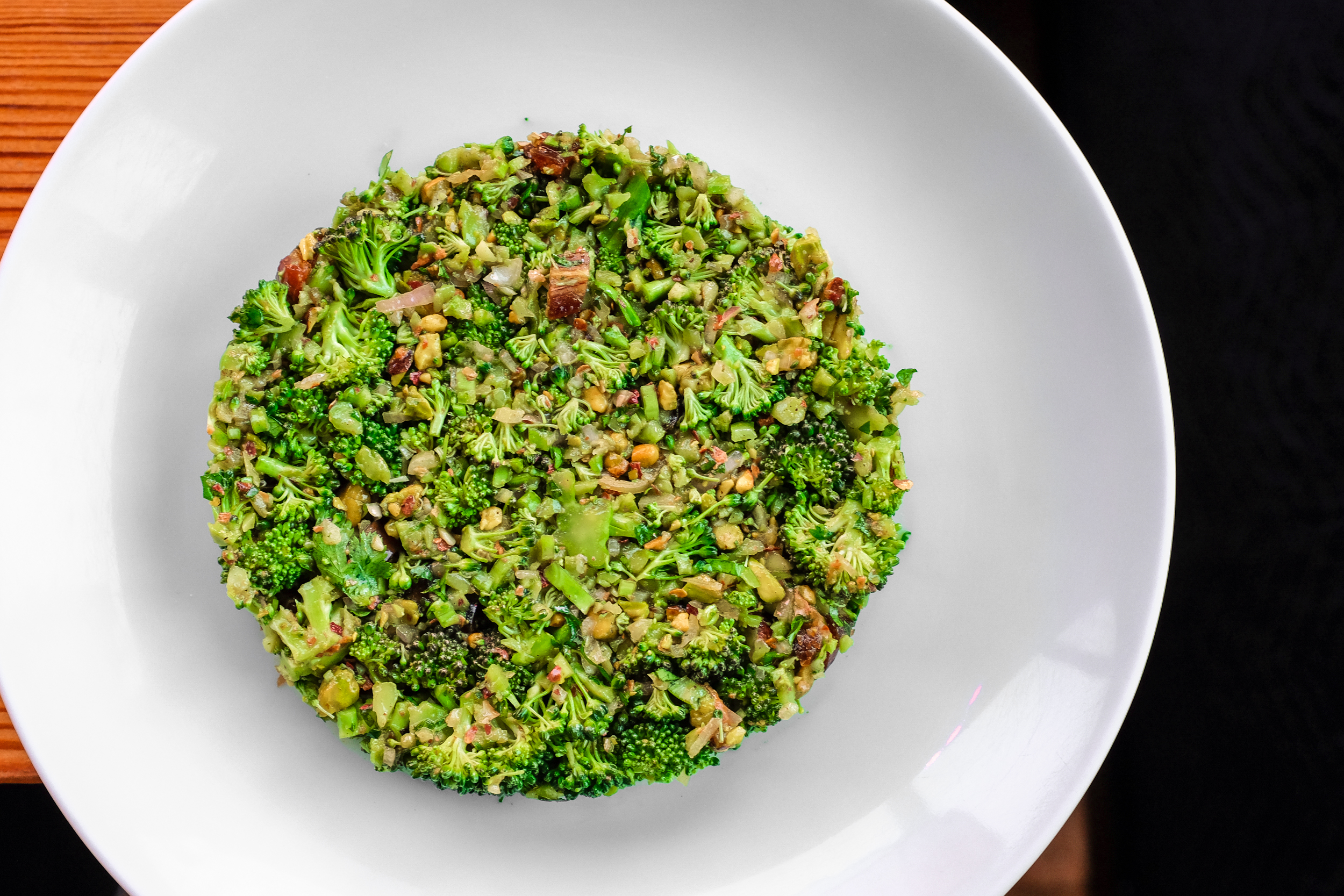 Broccoli with ras el hanout and dates at Parachute in Chicago 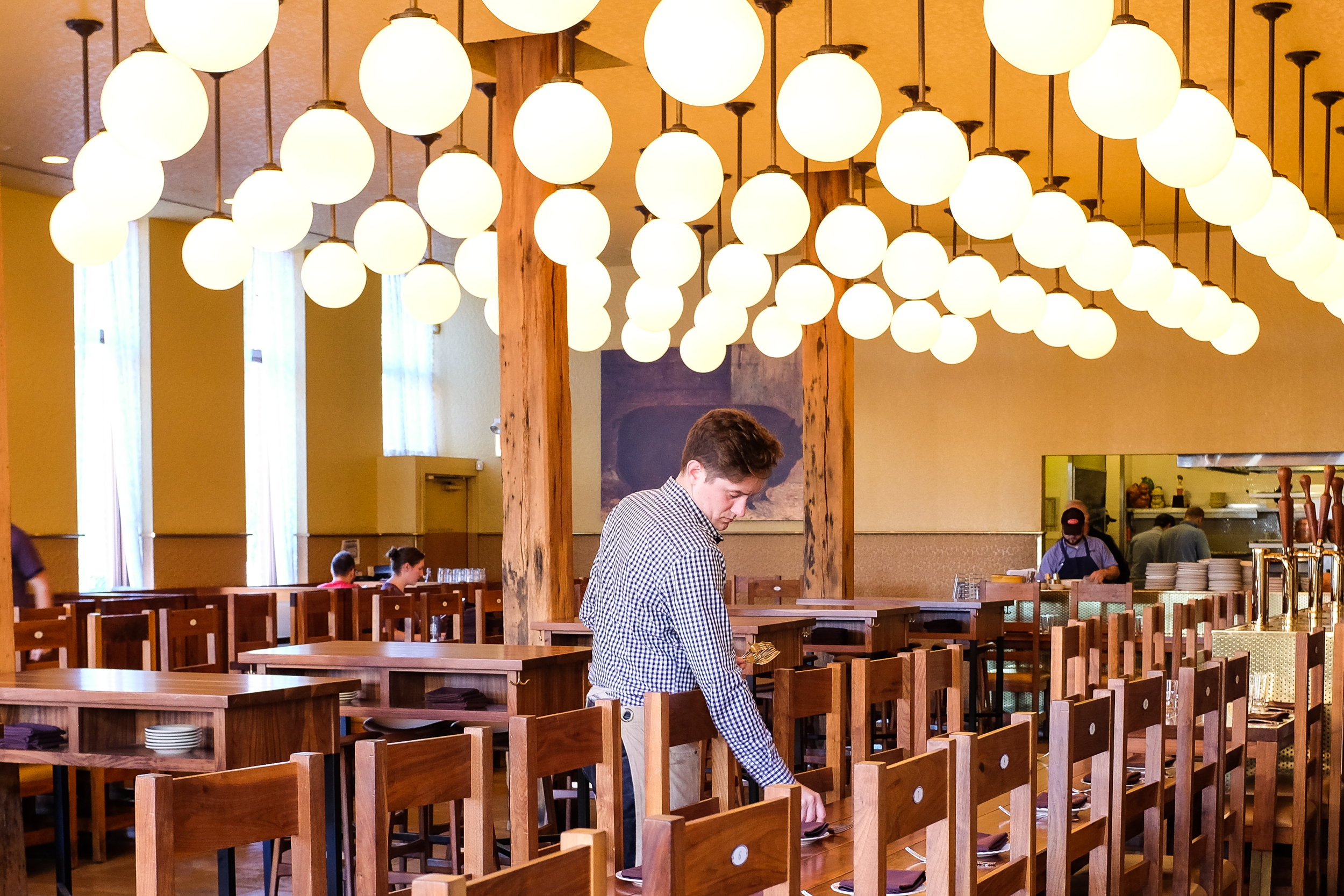 The dining room at the Publican, Chicago

Join our community of successful restaurateurs and chefs and get the e-book “Pour Your Heart Into It: How Starbucks Built a Company” by Howard Schulz as a gift!

BE FIRST TO KNOW ABOUT OUR NEW ARTICLES AND SPECIAL EVENTS!

Our newsletters keep international community of restaurateurs and chefs up to date with: